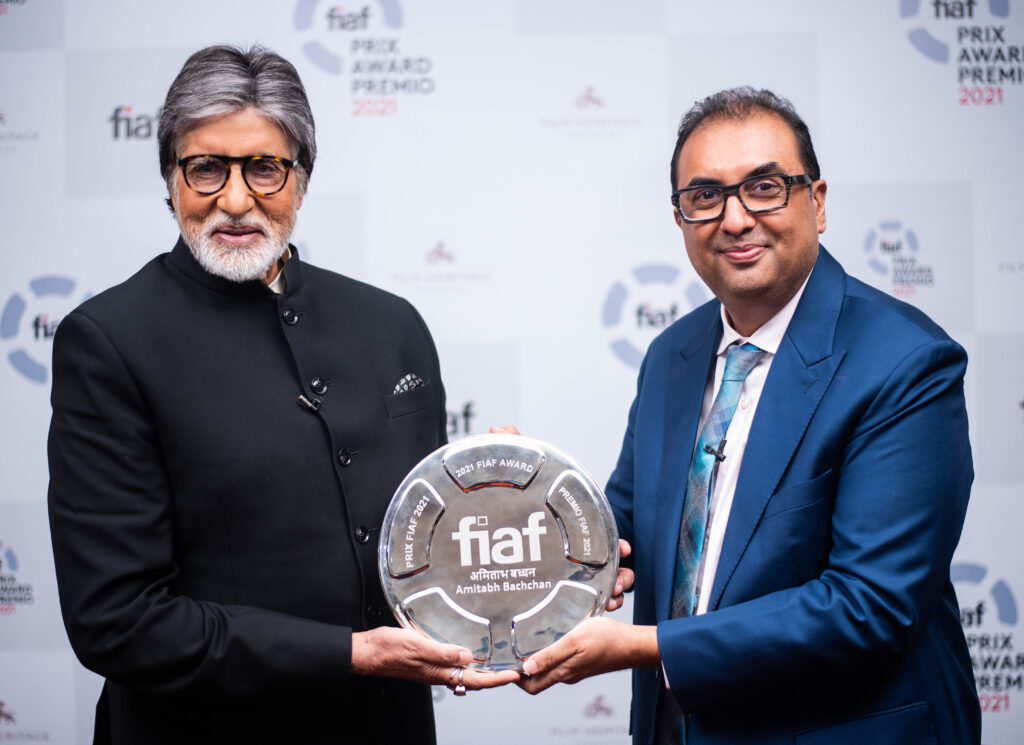 Legendary superstar and ambassador of Film Heritage Foundation, Amitabh Bachchan, has been conferred with the prestigious 2021 FIAF Award by the International Federation of Film Archives (FIAF). The award was presented to Amitabh Bachchan by Film Heritage Foundation director, Shivendra Singh Dungarpur, with renowned filmmakers and earlier recipients of the award, Martin Scorsese and Christopher Nolan joining in, at a virtual showcase that took place on March 19, 2021, live-streamed from Mumbai.

FIAF, headquartered in Brussels, is an international organization of film archives and museums from across the world. Amitabh Bachchan was nominated by Film Heritage Foundation and he was unanimously voted by all the FIAF Executive Committee members to be honoured with the award.

Shivendra Singh Dungarpur explained the rationale behind Film Heritage Foundation’s nomination of Amitabh Bachchan for the prestigious award saying, “India’s record in film preservation is dismal. By 1950, India had lost almost 70 percent of its films, and of the 1338 silent films made in India, just about 29 survive, many only in fragments. Our foundation has been working relentlessly to preserve what remains of our endangered film heritage not just in India, but in the subcontinent. This has been a cause that has been much neglected in our part of the world, and we have been fortunate enough to enjoy the unstinting support of our ambassador, Amitabh Bachchan, who has championed the cause of saving our film heritage and constructively wielded his influence to amplify the cause on a war footing in our part of the world. This is the reason we nominated him for the award, and he was unanimously voted by all FIAF Executive Committee members to be given the award.”

Amitabh Bachchan was honoured with the award for championing the cause of preserving India’s film heritage for future generations and for his unstinting support for the relentless efforts of Film Heritage Foundation over the years to save our endangered moving image heritage.

In a landmark moment for Indian cinema, icons of world cinema, filmmakers Martin Scorsese and Christopher Nolan, who also share a long-standing relationship with India through their affiliation with Film Heritage Foundation, felicitated Amitabh Bachchan during the ceremony.

Martin Scorsese had this to say, “Safeguarding cinema is a global cause with champions all over the world. Amitabh Bachchan’s advocacy for preserving India’s film legacy has been exceptional. With a career spanning over five decades, he is a celebrated actor who has put the considerable weight of his reputation behind the cause of film preservation in India and the entire subcontinent. I would like to thank Shivendra Singh Dungarpur and Film Heritage Foundation for nominating Amitabh Bachchan for the 2021 FIAF Award and the FIAF Executive Committee for unanimously backing this nomination. They could not have chosen a more deserving individual to recognize this year.”

Christopher Nolan, who champions celluloid as a shooting, exhibition and preservation medium in the digital age stated, “As a past recipient of the FIAF Award, I know how imperative it is that representatives of the film industry around the world come together to ensure that we preserve our film heritage. I want to congratulate Amitabh Bachchan on receiving the 2021 honour. As the ambassador for Film Heritage Foundation, he has played an essential role in putting the cause of film preservation on the map in India and the subcontinent.”

Acknowledging the global recognition, which also highlights the cause of saving India’s film heritage on a global platform, Amitabh Bachchan stated, “I am greatly honoured to receive the FIAF Award for the year 2021 for a cause that I am deeply committed to. It was when I became the ambassador of Film Heritage Foundation in 2015, that I realized the extent of the neglect and colossal loss of our precious film heritage and how we continue to lose more of our legacy every day. Recognizing the urgency of the situation, I have been working closely with Film Heritage Foundation since its inception to do everything in our power to save our films and to build a movement for film preservation in our part of the world. We must strengthen the idea that film archiving is as essential as filmmaking, and I do hope that we are able to garner further support for this most essential cause from my colleagues in the film industry and the government, to enable us to realize our dream for building a centre that will preserve and showcase our magnificent film heritage.”