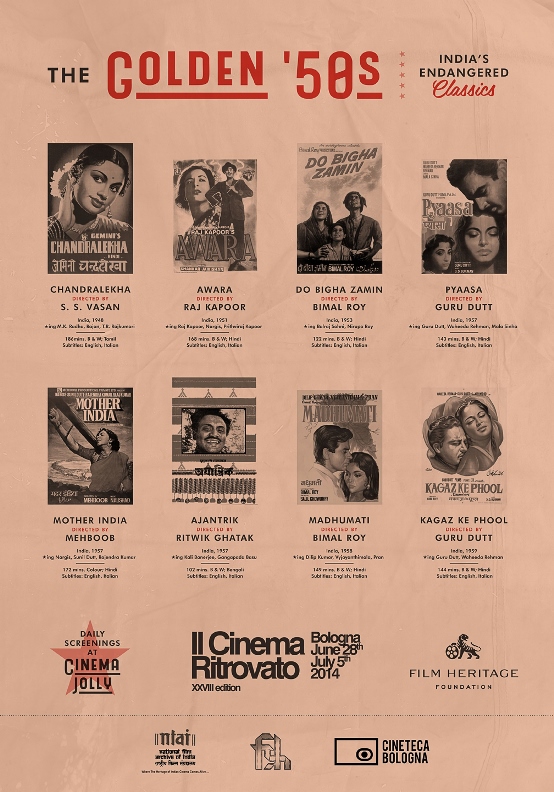 Film Heritage Foundation in collaboration with the National Film Archive of India (NFAI) and Films Division, Mumbai curated an Indian retrospective titled “The Golden ‘50s: India’s Endangered Classics” for the 28th edition of the Il Cinema Ritrovato Festival in Bologna, Italy. This unique festival that took place from June 28 – July 5, 2014 is dedicated to film restoration and film history and is attended by cinephiles, archivists, filmmakers, critics and journalists from all over the world. This was the first time the festival was showcasing an Indian film retrospective.

The package included eight landmark films from the 1950s, and in keeping with the tradition at the time, were preceded by the screening of eight newsreels that reflected the social and political scenario of a newly independent India at the time when these films were made.

The newsreels produced by the Films Division were being screened for the first time outside India. Set up in 1948 by the Government of India, the Films Division became one of the largest bodies in the world producing and distributing documentaries and short films. While considered propaganda films, these newsreels showcase rare vignettes of history like the meeting of Gandhi and Chaplin, Frank Capra’s visit to Bombay, Lord Mountbatten’s last day as Viceroy of India, a heroes’ welcome to Sir Edmund Hilary and Sherpa Tenzing Norgay after they conquered Everest, and the Dalai Lama’s arrival in India to begin a life in exile.