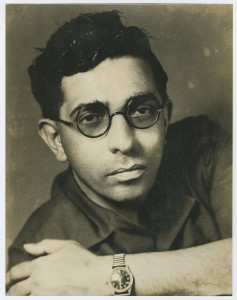 Jamshedji Bomanji Hormasji Wadia (commonly referred to as JBH) was a scion of the Lavji Wadia family, Master Shipbuilders to the East India Company and later the Government of India. Armed with degrees in English literature, law and Zoroastrian languages, he abandoned the well-worn path of banking and commerce to follow his dreams in the world of cinema. He was a renaissance man – a filmmaker, producer, writer, poet, political activist and freedom fighter.

JBH Wadia began his career in films working as a freelance writer-director in twelve silent films among them “Thunderbolt” (1931), “Toofan Mail” (1932) and “The Amazon” (1933) for various banners. These films, inspired by Hollywood swashbuckling adventure films, were forerunners of the iconic Fearless Nadia stunt films that became the signature of the Wadia brothers.

In 1933, JBH Wadia along with his younger brother Homi Wadia established Wadia Movietone and leapt headlong into the new world of talkie films with their first sound film “Lal-e-Yaman” an Oriental fantasy that proved a success at the box office. In 1935 the Wadia Movietone name became a household word with the release of the film “Hunterwali” starring the blonde, blue-eyed Nadia whose acrobatic stunts and daredevil antics made her an overnight sensation. There followed a series of films that were written and produced by JBH Wadia like “Miss Frontier Mail”, “Hurricane Hansa”, “Diamond Queen”, “Bambaiwali” and “Jungle Princess” that made Nadia amongst the first female icons of the silver screen in India.

But JBH Wadia was more than just about sensational stunt films. He had a strong social and political conscience. He participated actively in the Civil Disobedience Movement and was deeply influenced by Comrade M.N. Roy one of the founder members of the Communist Party of India. He made several films that used cinema to espouse social causes such as women’s emancipation, the abolition of the caste system and communal harmony. Films like “Vishwas”, “Krishna Bhakta Bodhana”, “Ankh-ki-Sharam” and “Amar Raj” were in keeping with the Wadia Movietone motto “Enlightenment Through Entertainment”.

JBH Wadia was a true pioneer and has been credited with many firsts in Indian cinema. He was responsible for promoting the documentary movement in India producing the first indigenous newsreel “Indian Gazzette” and “Haripura Congress” the first feature length documentary. He was the first to release a film without songs – “Nav Jawan” (1937); the first film in English “Court Dancer” (1942); and the first film in Sindhi “Ekta” (1942). He launched many a star including Fearless Nadia, Durga Khote, Meena Kumari and Shammi Kapoor and fostered the careers of many noted music directors, filmmakers and cinematographers.  JBH Wadia’s legacy is one truly worth preserving.