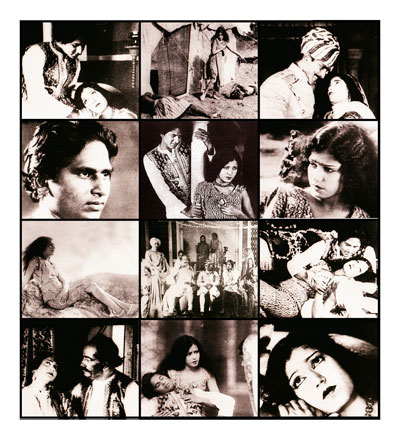 ‘Alam Ara’ occupies its position in Indian film history as the first film to have employed sound and possess a diegetic soundtrack, complete with songs. A swashbuckling tale of warring queens, palace intrigue, jealousy and romance, the film was heavily drawn from Parsee theatre. The image and sound were recorded simultaneously in the Tanner single system camera. Since there was no recording studio of any kind in those days, the film often had to be shot behind closed doors and at night to avoid all extraneous sounds. Jyoti Studios, located near the French Bridge in Mumbai overlooking the railway tracks was the studio where ‘Alam Ara’ was shot. The crew could only shoot at night when the trains did not run, since parts of the studio rattled with the sounds of the passing trains. Microphones were placed around actors to pick up their dialogues in such a way that they were hidden from the camera, while instrumentalists climbed trees or hid behind them to provide invisible musical support. This first ever song was sung in this film by Wazir Mohammed Khan. Sadly this film was lost as it was sold for silver.