We bring to you a new series about some of the important reasons behind the loss of India’s cinematic heritage: NITRATE FIRES!!!

Out of a total of 1700 films made in the silent era, only 5 to 6 complete films exist today. The Madras film industry made 124 films and 38 documentaries in the silent era. Only one film, ‘Marthanda Verma’ (1931), a Malayalam film, survives today. By 1950, we had already lost 70-80 percent of the films we had produced until then.

Until 1951, most film stock used for commercial motion pictures was made of cellulose nitrate as the film base. Commonly known as gun cotton, cellulose nitrate or nitrocellulose was a known explosive. It was soon discovered the hard way that reels of nitrate film were highly flammable and would spontaneously combust while inside projectors, vaults and on studio floors. 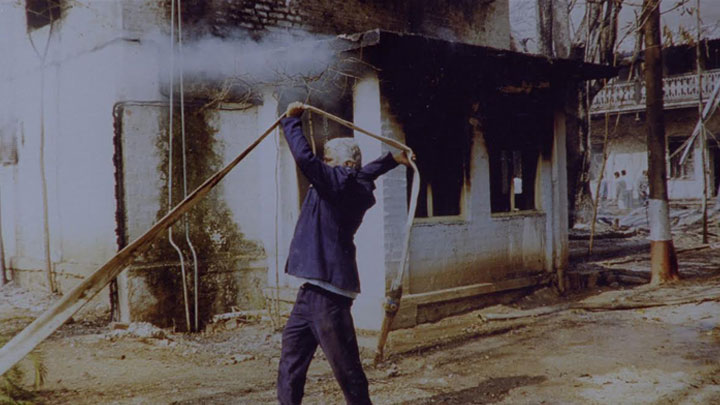 The earliest known incident of a film reel catching fire was Phalke’s ‘Raja Harishchandra'(1913) itself. It happened a few years after the film was made. In 1917, Phalke came to know that the last surviving print of his film had gone up in flames while it was being transported by a bullock cart from one cinema tent to another. The constant friction and the exposure to high temperatures had caused the film to combust. Phalke hurriedly re-shot the whole film replicating it from the original, shot for shot, to produce the version that exists today, albeit incompletely.

In 1955, there was a fire in the vaults of B.N. Sircar’s New Theatres that led to the loss of several prints of films that had been produced by the studio in the first decade of its existence, the 1930s.

As late as 2002, the vaults of the erstwhile Prabhat studios at the Film and Television Institute of India (FTII), Pune, saw a fire that destroyed the prints of 45 films which included some of the original material that Mr. P.K. Nair had collected from the Phalke family and the original camera negatives of important Prabhat Films like Sant Tukaram (1936), Chandidas (1934), Ayodhyecha Raja (1932) and Amrit Manthan (1934).

And barely a month ago, on 2nd July, 2014, there was a fire at the office of the Bombay Talkies studio at Borivli that again reduced the prints of several classic Indian films to ashes.